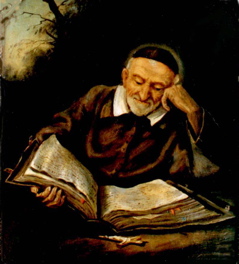 The name of Vincent de Paul is synonymous with compassion and practical help for the needy. As a young priest Vincent was deeply moved by the misery in which many of the people in city slums and remote country areas in France lived. The poor were neglected both spiritually and materially, while the rich lived in luxury. He felt urged to do something to change the situation. Alone he could do very little, so he enlisted the help of many willing volunteers, mostly women, and in 1617 formed them into groups to help the poor in their local areas. These groups became known as the Confraternities of Charity.

Concerned about the spiritual poverty of the country people, four years later, in 1625 he gathered another group around him and the Congregation of the Mission, better known in Ireland as the Vincentian Fathers, came into being.

Then in 1633, together with St Louise de Marillac, he co-founded the Daughters of Charity, who would have “for cloister the streets of the city.”

For further information on St Vincent