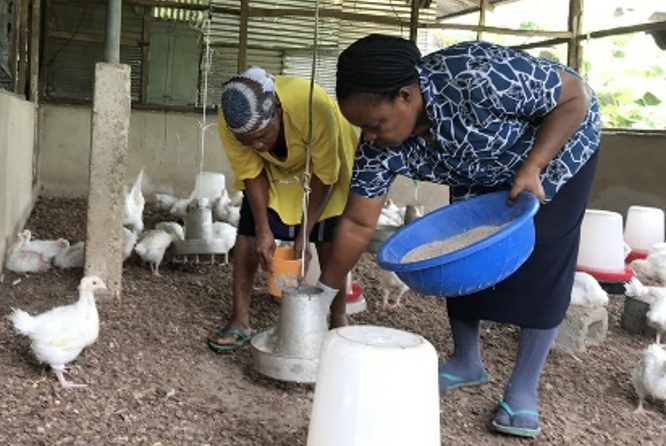 Ime Effiong (left, in yellow), one of the women who received mental health care from the Daughters of Charity of St. Vincent de Paul, tends to the birds on the poultry farm under Sr. Catherine Nkereuwem’s supervision in Uyo, a town in southeastern Nigeria. (Valentine Iwenwanne)

UYO, NIGERIA — On a hot afternoon in September 2014, Imaobong Effiong was picked up from the streets of this southeastern town by a sister of the Daughters of Charity of St. Vincent de Paul, who provides mental health support for impoverished and some indigenous men and women in southern Nigeria.

Effiong, who is now 24, was suffering from post-traumatic stress disorder, a psychiatric illness that may occur in people who have experienced or witnessed a traumatic event.

Sr. Catherine Nkereuwem and other helpers were returning from a community outreach program when they saw her on the street with her baby, having been notified about her illness by a local person. Up to 30% of Nigeria’s more than 200 million people are believed to suffer from mental disorders.

Poor collection of data on the mental health of the population hinders authorities in Nigeria from developing coherent policies to address the situation.

A group of indigent women pose with Sr. Catherine Nkereuwem (right, in blue print blouse) after weeding the farmland where they grow cassava behind the home in preparation for plowing and planting in Uyo, a town in southeastern Nigeria. (Valentine Iwenwanne)

“Our record shows that Effiong had been abused by several persons that adopted her as house help from childhood,” said Nkereuwem, who has worked at the sisters’ Divine Providence Home for three years. “It was a sad experience that triggered PTSD in her.”

Effiong doesn’t even remember what happened to her in the past; all she knows is that she has a son.

“I have a baby, I gave birth to him many years ago as a single parent, but he isn’t here with me,” she told Global Sisters Report. Her son, Emmanuel Effiong, stays in an orphanage in a nearby village run by sisters from a different congregation who also cater to his educational needs.

Since the home opened in 1986, the sister, Catholic volunteers and others have cared for more than a thousand women and men found on the streets in the southern coastal state of Akwa Ibom, says Nkereuwem, who is a psychiatric nurse and the project coordinator of the home.

Nkereuwem partners with the state health ministry, which takes responsibility for drug treatments and provides an additional psychiatric nurse at the home. A driver, local volunteers and sometimes police assist her with retrieving people from the streets.

Sixteen women inpatients are abandoned at the home because family members have rejected them or the information to find their original homes was incomplete. In 2020, the facility treated 76 outpatients, both men and women. 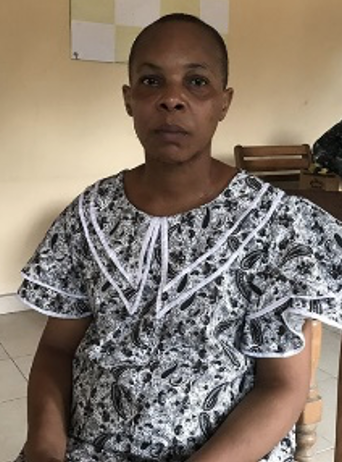 Doris Iyang was brought to the home by her family three years ago with schizophrenia, a serious mental disorder causing delusion, hallucination and disorganized speech. Iyang’s mother, who also was schizophrenic, was a patient in the Divine Providence Home in the late ’90s.

Nkereuwem said Iyang’s mother was rehabilitated after she was treated successfully.

“Iyang was admitted into this home in July 2018. She’s still receiving treatment, and her children often visit her here in the home,” she said, noting that Iyang has four children.

Iyang, Effiong and others like them are a warning sign of what could be a far greater crisis to come for Nigeria, Africa’s largest economy.

One in four Nigerians, about 50 million people, are suffering from some sort of mental illness, according to the World Health Organization. The country is among the most depressed countries in the world. A recent United Nations-sponsored 2021 World Happiness Report ranked Nigeria as the 116th happiest place in the world out of 149 countries, its worst ranking in seven years.

Nigeria has an increasing rate of suicide attempts strongly linked to depression with only about 300 psychiatrists serving the country’s more than 200 million people. But far from being a great concern, mental health disorders are shrouded in secrecy pushing people away from seeking help.

Nigeria operates only on the colonial era Lunacy Act, a mental health law that dates back to 1958 and allows legal and medical authorities to confine those deemed to be mentally unhealthy according to outdated psychiatric norms.

Nigeria’s mental health policy was first formulated in 1991, and, according to the World Health Organization, “its components include advocacy, promotion, prevention, treatment and rehabilitation” for persons with mental health disorders. But deep-rooted health care failure and poor welfare systems leave most sufferers unable to get adequate mental health care or support when needed. 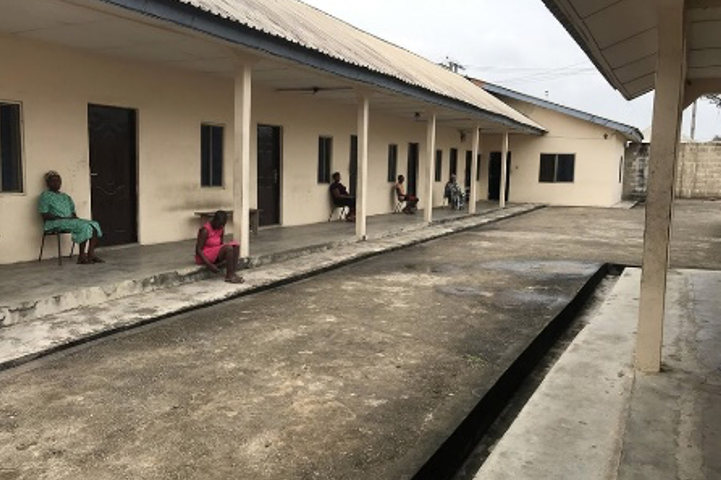 A stretch of the boarding facility at the Daughters of Charity of St. Vincent de Paul Divine Providence Home, where disadvantaged women are housed until they regain their mental health and can be reintegrated back into society. (Valentine Iwenwanne)

However, with this currently out of reach, the Daughters of Charity of St. Vincent de Paul are addressing the gap by providing mental health support at their Divine Providence Home to indigent women and men society has rejected.

The goal is to reduce the number of women needing psychiatric help who end up on the streets of Uyo and its environs. The sister and others provide medical care and psychiatric treatment and help the women regain their lost dignity, learn new occupational skills, acquire self-confidence and reunite with their families. 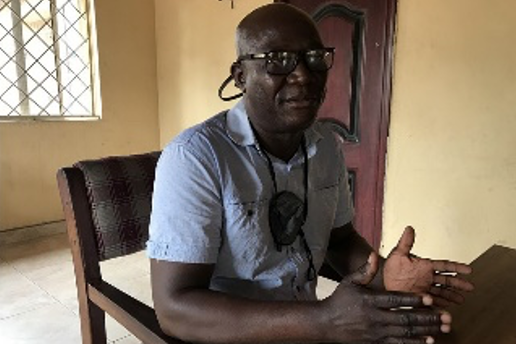 Raphael Akpan is a psychiatric nurse with Akwa Ibom State government Ministry of Health in Uyo, a town in southeastern Nigeria. He works with the Daughters of Charity of St. Vincent de Paul to provide mental health trreatment to patients. (Valentine Iwenwanne)

Nkereuwem says home visits are a major part of the commitment.

“When we went to visit some of the women in their homes, we noticed the presence of mentally ill women around the streets,” she said, adding that serving this population “has to be holistic.”

The Daughters of Charity also provide rehabilitation services such as psychiatric assessment and treatment, individual and group therapy, accommodations and help reintegrating patients with their families.

When a new patient comes into the home, the sister begins with a psychiatric assessment. Nkereuwem says she takes the patient’s history to ensure the person is experiencing a mental illness.

“In the psychiatric setting, there is a procedure for this which leads to the final diagnosis and the suitable line of treatment depending on the diagnosis,” she said, adding that the duration of treatment depends on the type of mental illness and the individual’s response, which may take months or years.”

After the psychiatric assessment, lodging is provided in the home for women with mental illness. Those who have family are given short-term accommodations until they become stable and can return home and receive treatment as outpatients.

Akpan said they approach those with aggressive behaviors with patience.

Once patients under treatment are mentally stable, they are offered rehabilitation services to help them avoid relapse. Patients are interviewed, matched with a job function and given a trial opportunity to raise poultry, fish or crops, make beads, bake bread or work in a chalk factory.

Effiong, for instance, has regained her stability, and works on the poultry and fish farms. After observing her early morning devotion, she feeds the birds and fish. Nkereuwem says the work motivates patients, expedites their healing and gives them a sense of belonging.

The sister also operates a “home finding” service to reunite patients with their families. Nkereuwem says this process begins immediately when the patient gets enough insight into her mental state and can give useful information about herself and her family. The data is used to trace and locate the patient’s family’s home, she said. 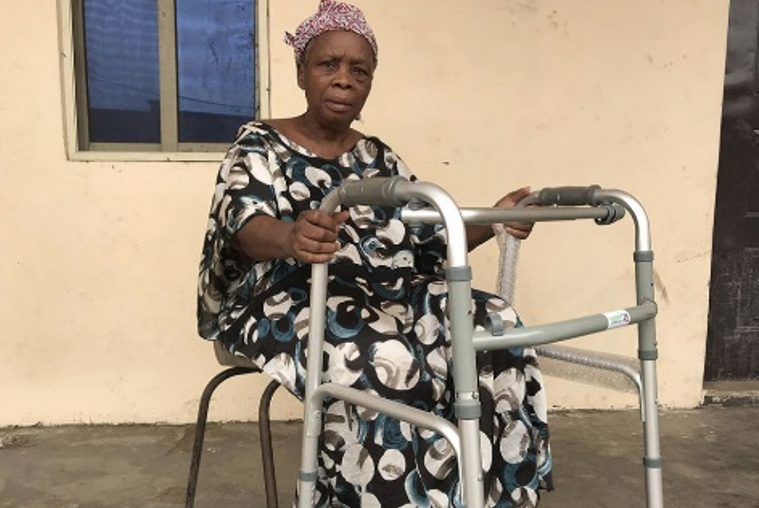 Ikwo Effiong is one of the oldest patients at the Daughters of Charity of St. Vincent de Paul Divine Providence Home in Uyo, a town in southeastern Nigeria. She slipped on the ground and broke her femur on a rainy afternoon in March 2020. (Valentine Iwenwanne)

With the help of community, religious and traditional leaders, the patient is driven to her original village to ensure that she is properly reintegrated and accepted by her family and community.

But sometimes returning the women to their families and former communities is difficult, Nkereuwem says. The sister and others tried to reintegrate Ikwo Effiong, 78, the oldest woman in the home, but they did not succeed.

“We tried to convince her family members, especially her biological brother who denied knowing her,” she said.

The workers brought her back to the home in Uyo and continued persuading her brother until he agreed to accept her. She was later rehabilitated, reintegrated and lived with her brother. “But the business we set up for her collapsed, so she found her way back to the home again,” Nkereuwem said.

Valentine Iwenwanne is a Nigeria-based freelance journalist who writes about global health, development and the environment for various publications, including The National and Vice World News.