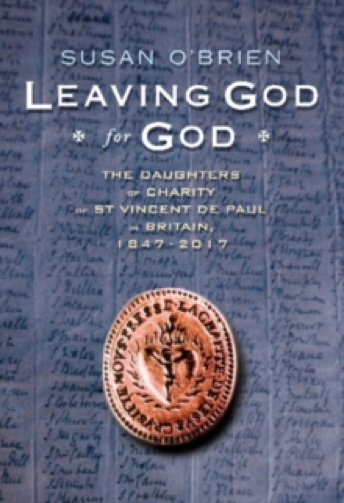 I was born and reared in the shadow of the North Charitable Infirmary on the North side of Cork City. The hospital was managed by the Daughters of Charity. As we grew up we became ever more conscious of the gracious ladies in their long blue dresses and amazing flip-flopping white hats. It was the Daughters who healed our cuts and bruises and treated our gumboils and sore eyes. I as a child had my tonsils removed and all at no cost. They introduced us to the Miraculous Medal and so to a life long devotion to the Mother of Jesus.
As the years moved on my vocation led me to the mission fields of Nigeria and for me an opportunity to pay back some of that loving care to the Daughters of Charity. Bishop James Moynagh invited the Daughters to his diocese of Calabar. So I with others helped the Daughters of Charity to set up their very successful Girls Secondary Commercial School at Adiaha Obong in Uyo.

No wonder then that this superb history by Susan O’Brien is like grist to the mill for me. This is not just a chronology. It is a riveting analysis of a spiritual phenomenon that is the Daughters of Charity. It is a spirituality that is rooted in Incarnation. To me there is no such thing as a golden era of the past in Christianity. We tend sometimes to look back too much. In the Crucified Risen Christ every era is golden. All time is now His. The Daughters of Charity live this daily.

The Catholic Church does have it’s dark stormy nights and heavy rough seas as we are experiencing at present. There is trouble with some of the crew and disturbance among passengers. Some people are abandoning ship while others are manning the pumps. One thing is certain. This ship is unsinkable because of Him who is at the helm. Certainly the Daughters of Charity know this and believe this. That is why they are in it for the long haul.

The situation to my mind in the British Isles and I include all Ireland, is tragic. Never has there such poverty and I don’t mean just food banks. The real widespread poverty is ‘ Spiritual ‘. I mean a beautiful young generation that has everything and has nothing. A society bewildered in a desert in search of love and meaning (God In Christ). A vigorous renewed Incarnation based spirituality is what is needed to tackle this desert. As Susan O’Brien’s history shows – The Daughters of Charity will not be found wanting.