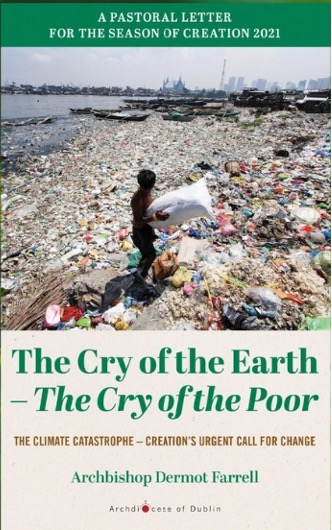 At this time everyone on our planet is confronted with two interconnected crises: the coronavirus pandemic and the ecological crisis. Both define our age. Both require urgent action. But it is the reality of climate change that is ‘humanity’s defining challenge.’ COP26 attempted to highlight the urgency of dilemma, alas, the pain of those most affected now by climate change fell on deaf ears, or so it seems!  Changing minds and hearts needs to be an urgent work in progress then, in our Irish context as well as across the world.

To respond to this climate crisis is demanding. Archbishop Dermot Farrell, to mark the beginning of the Season of Creation on September 2021 published a pastoral letter, The Cry of the Earth—The Cry of the Poor: the Climate Catastrophe—Creation’s Urgent Call for Change. This pastoral is an invitation to all people—those in the Church and those beyond—to reflect on the climate crisis in new ways, so that the baptised may live the life of faith more vibrantly, and everyone may respond more actively to the serious situation in which the world finds itself.

A group of Daughters of Charity explored how we might follow Jesus in this unprecedented global climate crisis. Archbishop Farrell’s pastoral provided the ideal material to consider what God is saying to the world today. The reflection, on Zoom, happened over three weeks in November – it was indeed, a rich and rewarding experience. The following comments reflect some of the responses to the sessions.

“The initiative made possible our sharing on a document which in a contemplative and practical way presents the greatest challenge facing us today. I found the sessions to be rooted in prayer, reflection and active engagement. The time passed all too quickly.”

“I was very happy to be part of it as it encouraged me to read the Pastoral better. It was very helpful to hear the reflections of others in the group.”

“I became aware of the value of the document, was encouraged to read it, and enjoyed sharing it with other sisters. It was lovely to see that sisters were so enthusiastic and sincere about the topic and it was evident that most had studied it well in preparation for the sessions. What I loved was the sharing of gems from it. One of the gems I found was that though “God … erases his ‘footprints’, … those who are attentive can come to know God’s care, God’s providence, and the stirrings of the Lord in their midst.””

“It sets the Care of the Earth in the Scriptural realm. The pastoral has a wonderful lesson on prayer. I liked the way Archbishop Farrell calls us to action by producing a prize for the best initiative- open to “all faiths and none””