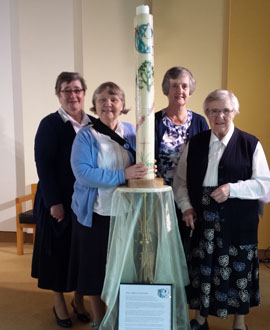 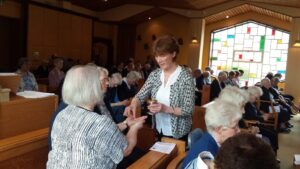 On 10th June 2017 105 Daughters of Charity gathered in their Provincial House in Blackrock Dublin to complete this year’s work on Laudato Si. As part of our Province Plan drawn up in 2016, we each committed to ,‘ educate ourselves towards a new understanding of our place within the universe in order to have a change of heart and embrace an ethical use of the earth’s resources’ (Province Plan p. 8)

We gathered once again to  review the whole year’s work on Laudato Si. This day was a culmination of a whole year’s work and the goal of the day was to identify one Province action that we could take to continue our efforts to live out the challenges of Laudato Si. We began the day with a prayer, ‘The beauty of the Earth’ and then a synthesis of the year’s work was presented under 5 main headings as follows: 1. Reduce, Recycle, Reuse, 2. Biodiversity, 3. Prayer and thanksgiving, 4. Education, and 5 Eco-congregation Ireland.  We spent some time then in reflection, discussion and group work seeking to find what one action we could embrace as a community to further our work. After some time we decided that the one action we could all buy into was to work towards becoming a member of Eco Congregation Ireland. Our final statement read:

‘As a Province we commit to working towards becoming a member of Eco Congregation Ireland. Our focus as a province is to eliminate the use of plastic while each local community will continue to take responsibility for the actions they are already engaged in. This was a very important moment for us. The choosing of this action and commitment to it as a Province, was ritualised today, on the day we hosted the Climate Justice Candle. Having agreed to undertake this one Action as a Province we realise that this task necessitates team work. The wisdom of an old Irish Proverb teaches us;‘Ar scath a cheile a mhairimid’ We live in the shelter of one another.

We then watched the video entitled, ‘Lessons from the geese’ which describes the power of teamwork. After this one of the Sisters lit the Eco Congregation candle and held it up as the prayer entitled, ‘A prayer for the earth’ ‘Laudato Si’ from the Eco Congregation resource pack was read. We then had a moment’s silence before processing to the chapel to begin our Eucharist. As we processed we sang the hymn, ‘Laudato Si’ and during our Eucharist we prayed the Eucharistic prayer for creation written by Diarmuid O Murchu. The gospel of the day was that of the widow’s mite. We had a collection just after the gospel and the money collected was donated to our mission in Kenya who are also working with us on Laudato Si. Part of their work on LS this year was to raise money to buy charcoal stoves for cooking. These stoves will be used to cook for people with special needs in outreach centres. The money we collected will be sent to them.

We as a Congregation feel very privileged to have shone a light on climate justice today. In No. 10 LS it states, ‘, ‘there is an inseparable bond between concern for nature, justice for the poor, commitment to society and interior peace’. This resounds strongly with our charism, ‘Caritas Christi Urget Nos’. In this the 400th year of the birth of our founder St. Vincent de Paul. We believe that St. Vincent and St. Louise would urge us to embrace the challenge of Laudato Si which is at its core is profoundly Vincentian.

Click here to see more photos in our gallery