Sister Bernadine thanked for her work with homeless in Belfast 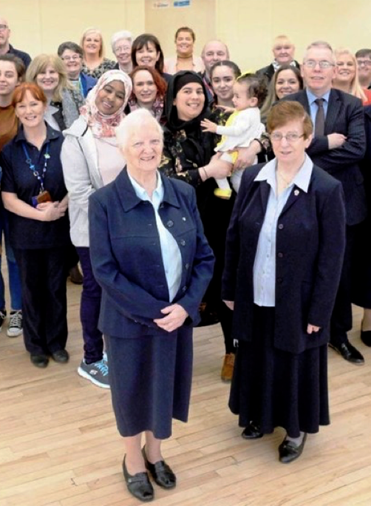 Sister of Charity: Members of the community in north Belfast turned out to recognise the contribution of Sister Bernadine, pictured centre front, from the Order of the Daughters of Charity, who retired last Friday after 17 years of work with homeless families from her base at Grainne House in north Belfast. Picture by Mark Marlow, Pacemaker Press.

AFTER more than 30 years helping families and those in need in Belfast, Sister Bernardine from the Daughters of Charity has said farewell.

Sr Bernadine has worked in the city since 1985 but after retiring last week is now moving on to other work with her religious order.

Her last role was managing Grainne House, which offers Housing Executive accommodation for vulnerable families; she started work there in 2000.

As well as her work in north Belfast, Sister Bernadine founded a homeless drop-in centre in the Divis area, which later became the Welcome Centre.

After serving in Drogheda, Dublin and Liverpool, Sister Bernadine – who entered the Daughters of Charity in 1956 – was placed in the order’s community in Clonard in west Belfast in 1985.

From there she was placed in the Cavendish Street, Moyard and Glen Road communities.

From Glen Road, she took on her management role in Grainne House. It opened in November 2000 with 21 self-contained temporary accommodation flats for homeless families. Over the years, more than 300 families have benefited from its service.

Sister Bernardine said Grainne House’s success has been built on a strong team and establishing “good relationships with every family who came to stay”.

A special presentation event at North Queen Street Community Centre gave people the opportunity to personally thank Sister Bernardine for her help and to wish her well for the future.

Clark Bailie, chief executive of the Housing Executive, said “Sister Bernardine has been central to the services provided to vulnerable families”.

“Her daily, hands-on leadership has been an inspiration to all,” he said.

“Building good relationships with every family who came to stay was always central to the way Sister Bernardine operated, making them feel comfortable, providing stability and much needed support in times of stress.

“Everyone at the Housing Executive wishes her well as she starts the next chapter of her life.”

Sister Nuala, from the Order of the Daughters of Charity, said her Cork-born colleague had used her years in Belfast to make a determined effort “to help tackle homelessness, particularly among young people”.

“She has many achievements including helping found a homeless drop-in centre in the Divis area, which later became the Welcome Centre,” she said.

“In Grainne House, she created an atmosphere where people were not coming to a hostel, they were finding a home.”