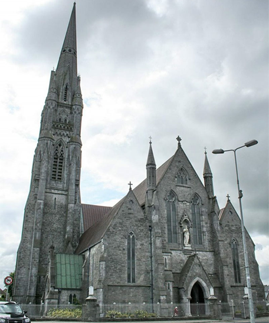 If you are visiting Limerick city, a visit to St John’s Cathedral is a must. Its construction began with the laying of the foundation stone in May 1856 and in the centuries following major renovations and restorations have taken place. Throughout all that time has stood an altar dedicated to St Vincent de Paul.

There is a rose window depicting St Vincent holding a small child. A panel over the Altar has a similar depiction. Beneath the Altar there are three panels.  Two of these depict the Daughters of Charity involved in health care and in education. The centre one depicts St Vincent with the Priests and Brothers of the Mission (Vincentians).

Limerick is associated with the Vincentian Family since the time of St Vincent.  At the request of the Bishop of Limerick members of the Congregation of the Mission (Vincentians) went to Limerick.  Fathers Gerald Bryan and Edmund Barry were two of these Missionaries. This was during the Penal Times and they had to abandon the city and move onwards in the proclamation of the Good News of the Kingdom.  They went for a time to Oatfield, O’Callaghan Mills Parish, Co Clare. Thady Lee was a native of Adare Co Limerick and he returned to Limerick to serve the sick and destitute of the city.  After the fall of the city he was captured and martyred.  The first martyr of the Vincentian, and who would have known St Vincent de Paul.