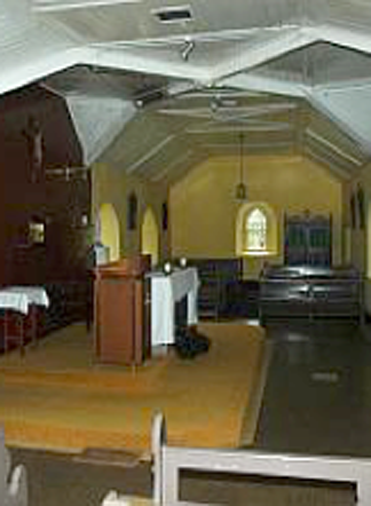 This is the first in a series of articles exploring the connections between St Vincent de Paul and Ireland. Let us take part on a virtual pilgrimage to places dedicated to the memory of the saint.

Since the 17th Century there have been connections between Ireland and the Vincentian Family.  At the request of the Bishop Dwyer of Limerick in 1646 St Vincent sent priests and brothers to Limerick. There are some churches and at least three parishes dedicated to St Vincent de Paul. Many churches have stained glass windows depicting the saint. The following are some of the parishes and churches dedicated to St Vincent de Paul.

Oatfield Church is reputedly the oldest church in the Diocese of Killaloe and has a unique history stretching back to Penal Times. It is one of only two surviving eighteenth-century barn churches in the country, and it is one of the best preserved and still in use.

In 1646 a French priest, St Vincent de Paul, responded to a request from Bishop Dwyer of Limerick to send priests to work in the city. By 1651 Limerick was under siege by the Cromwellian army under General Ireton, and a dreadful plague had broken out. At least five Vincentians came to Limerick at that time. Among them were two Irish Vincentian priests, Fr Gerald Bryan and Fr Edmund Barry both of whom had been ordained in Paris. Brother Thady Lee was born in Tuogh, Adare, Co Limerick in 1623. He was a clerical student with the Vincentians in Paris at this time. He also returned to work with the poor and the sick in Limerick. After the fall of the city to the Cromwellian army he was captured and killed. Meanwhile Frs. Bryan and Barry escaped from the destruction and pillage which was rampant in the city at that time, and made their way over the hills to Oatfield. They settled in a little stone house in Derrynaveagh. The tradition is that they celebrated Mass for the local people in the thatched barn.

The Vincentian connection with Oatfield was recognised in May 1966, when the church, previously dedicated to St Peter, was rededicated to St Vincent de Paul, by Bishop Joseph Rodgers. A statue of the saint had been sent from Paris to the Vincentian Church in Phibsboro, Dublin, a hundred years previously. It was subsequently donated to Oatfield Church by Fr O’Neill CM, on the occasion, of the dedication ceremony.