Why Give Up Chocolate for Lent When You Can Give Up Plastic? 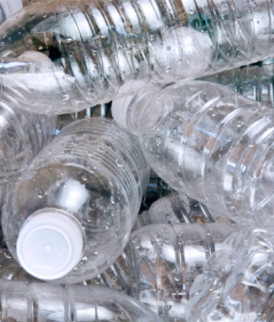 I just love the word serendipity. It sounds so sweet. When it happens to me, it’s even better than eating a box of chocolates.

Just last year, I was considering starting a “why give up chocolate for Lent when you can give up plastic?” initiative at the Washington National Cathedral, where I’m a volunteer chairperson for their environment committee. For some reason, I found myself hesitant.

During Lent, a season observed during the six weeks before Easter, many Christians make a commitment to give up certain luxuries as a form of penitence. But would people really recognize plastics as a form of luxury? Or would it be better to just let people make their own choices? I needed some encouragement.

I never could have imagined that encouragement would appear while standing on line waiting for a bus from Bethesda, Maryland to Manhattan. The woman standing in front of me was carrying a cloth bag with the words Plastic Pollution Coalition written on it. I just had to ask her about the bag. It turns out that the woman, Ann Luskey, is on the board of the Plastic Pollution Coalition and is involved in educating and advocating for a plastic-pollution-free-world. Serendipity!

We sat together and spent the next few hours discussing single-use plastic and plastic pollution. She was extremely enthusiastic about my idea, exactly what I needed to move forward. She lives only 10 minutes away from me and has remained a source of inspiration.

I worked with the Cathedral and we developed a flier that was posted online and distributed among congregants. I contacted Jodi Rose of Interfaith Partners for the Chesapeake, and she appreciated the idea and included a link to it in one of her emails. It started to get some traction last year, and I’ve decided to continue to move the effort forward this Lenten season.

I do double-duty and also serve as chair of the Episcopal Diocese of Washington’s Environmental Network. As a retired pediatrician, it seems natural to me to devote this second part of my life to advocating for preserving the earth’s natural resources for subsequent generations. What could be more important?

Fortunately, our Diocesan Bishop, Mariann Budde, has approved my moving the initiative forward. I am hoping to get even more people involved this year.

It seems I get two reactions to the idea. It’s either great enthusiasm or I’m asked “What? Give up plastic? That’s impossible!” Plastic use has become such an integral part of our lives, and it does seem impossible to give it up.

“I’ve been working on getting as much plastic as I can out of my life, and I’ve come to realize it’s a lifelong project. I’ve also come to accept that some plastic use is necessary and shouldn’t be eliminated.”

I explain to people that they can begin with rethinking their single-use plastic. Shopping can be accomplished with reusable cloth bags. Likewise, those plastic water bottles, the single greatest source of plastic in our waterways, can be replaced by tap water carried in stainless steel or reusable plastic water bottles. Sandwiches can be sealed and kept fresh in containers. Uneaten food from restaurants can be taken home in a container you’ve brought along for just that purpose.

The more you engage in the effort, the easier it becomes and the more ideas you generate for yourself. It’s an opportunity to put a little creativity into your life!

I must admit that I myself still have a lot to learn and a lot to change. I recently found myself reaching for a half gallon of orange juice in a plastic bottle, only to realize that I could buy it in a milk-like container that can be recycled in my municipality. I’ve been working on getting as much plastic as I can out of my life and I’ve come to realize it’s a lifelong project. I’ve also come to accept that some plastic use is necessary and shouldn’t be eliminated.

You might be reading this and thinking, “But I don’t observe Lent.” What I would say to you is, why not consider starting this initiative anyway? While I’m a Lutheran-turned Episcopalian, my husband is Jewish. One of our sons and his family are Mormon. Another son and his family are Muslim. My daughter is an atheist with a lapsed Catholic husband. Together, they’ve all bought into living with less plastic. Can we count you “in”?

Check out New Dream’s resources for reducing the use of bottled water and plastic bags in your community.

New Dream: More of What Matters