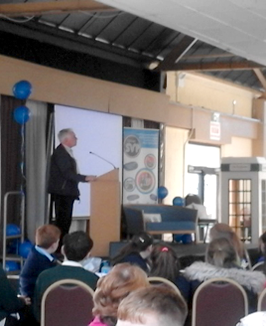 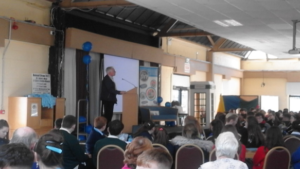 The first speaker was Fr Peter McVerry SJ.  He spoke on the reality of homelessness and said told us that there are more people homelessness in Ireland now than at any time since the famine.  The majority of people who are homeless are ordinary people in ordinary jobs or are students. The hardest part of homelessness is that knowing that nobody cares, that ‘no one would miss me if I disappeared’.

Following each presentation there was about 10 minutes discussion at the tables and then the speaker took questions and comments for about 20 minutes. 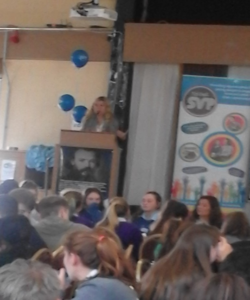 The second speaker of the day was Dr Cara Augustenborg.  Her topic was on the environment and care of the earth.  She encouraged us to end the use of fossil fuels. She spoke of a Circular Economy where the waste of one produce could become the fuel for another product. Another concept she spoke of was the Sharing Economy where instead of buying everything one could hire tools and other items.

The third speaker was John Lonergan, the former governor of Mountjoy Prison. John spoke about community and the need to belong.  To have a sense of identity and the necessity of being proud of our roots and where we come from, where we call home. He spoke of the very valuable role of volunteers in our society and how they help to form and promote community. He quoted Canon Hayes the founder of Muinter na Tire who said that, ‘community was a social mix of equals’. He encouraged the students to get involved and become a campaigner and an activist. At every chance give it a go.

The final speaker of the day was Joanne O’Riordan, who spoke of her own journey. She told the audience that life has no limits.  That she decided to take on the world and she explained how technology has affected her life. She engaged with the audience in her own unique and special way.

The day ended as it began with a moment of silence and reflection. It was an enriching experience with much to ponder and implement into the future.  Sincere thanks is due to Paddy Daly and Helen Ralph the Regional Youth Officers for their work in organising the day. 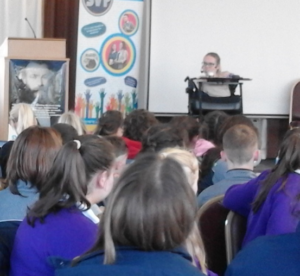 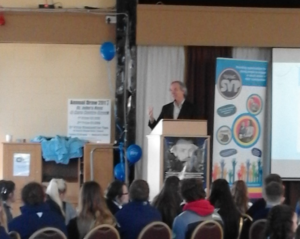